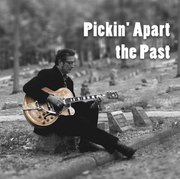 Well, I finally have the info on the new George Bedard album! It’s called Pickin’ Apart the Past” (Cool title!), and it’s a thinly veiled reference to George’s approach to this new CD. The all instrumental approach is a switch from his previous rockabilly nature and focuses mainly on other musician’s works and his interpretations of them. Any musician who has ever tried to learn someone else’s song has always had to deconstruct and analyze a song before reconstructing it for themselves. This is a process that goes back as far as anyone has ever been inspired to pick up a “git-box”-or whatever they had on hand to learn someone else’s song. George is paying homage to those who went before him as he figuratively stands on their shoulders. In a nutshell, that’s what the title means – along with the double meaning that he plays guitar and uses a pick. I’m also excited to read that liner notes will be included with the CD because that gives direct insight into the artist’s thought processes.

Of course, George throws in a couple of his own originals. And this is not mentioned lightly. I can’t wait to hear it judging by his previous instrumental releases. On his first album, “Upside,” with The Kingpins, they did, quite possibly, one of the greatest instrumental covers of all time – let alone the equal of any song: The Chantays’ “Pipeline!” The song ebbs and flows in atmospheric dynamics created by all three members: George, Randy Tessier, and Rich Dishman. Then it literally EXPLODES after quiet segments until the climactic finale! The song is the equivalent of being on a rollercoaster ride because you can’t get off once you’re on. Just like being on a coaster, the quiet sections give the listener (rider) a chance to catch their breath before tumbling headfirst down the steepest hills! It is literally 3 minutes and 41 seconds of pure pleasure, and it’s even more dramatic when you see them play it live, because all three use their body language to hit their notes perfectly! It is a masterpiece!

And don’t get me started on “Hawaiian Boogie” on their second CD, “Hip Deep!” The Kingpins have been performing Floyd Cramer’s “Last Date” live for a number of years, and ironically it is almost the exact opposite of “Pipeline,” giving the listener a “comforting feeling” like a warm blanket on a chilly night. Not every band can convey such diverse emotions.

I love instrumentals and I believe they are often underappreciated, so I’m quite thrilled that George has chosen to do an all-instrumental disk. On “Pickin’ Apart the Past” , George surrounds himself with all-star guest musicians. Judging by past performances, George’s first solo CD should be a GREAT ride!

You can read the entire press release on George’s Facebook page. Here’s the link: http://www.facebook.com/pages/George-Bedard-and-the-Kingpins/119563528063815

I heard Paul McCartney’s new release on Dennis Mitchell’s Breakfast with the Beatles last week. It’s for a new Buddy Holly tribute album Rave On! to be released later this month. The album has an eclectic mixture of artists ranging from The Black Keys and Nick Lowe to Kid Rock and Cee Lo Green. McCartney does a cover of “It’s So Easy.” He slows it down and gives it a slightly harder edge than other cover versions, and the vocal sounds like vintage 70s McCartney-kind of raw and dramatic like on “Oh Woman, Oh Why.” I’m not sure if I like it yet, but I’m also sure that it will probably grow on me like most things that he’s done.